Campaign Against the Trade Union Bill – 8th to 14th February 2016 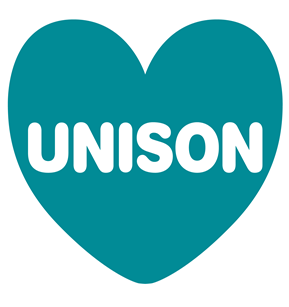 Trade Unions across the UK will be taking part in a week of action from 8th to the 14th February, UNISON is calling on all our members to show why your union is important.

A rally will be taking place in BLACKBURN on SATURDAY 13TH FEBRUARY 2016 (time to be confirmed).   Please come along and support us!

Many of you know about  – and have taken part in– the campaign against the Trade Union Bill.

We’ve won some important changes to the Bill in the House of Commons but we don’t know whether it will become law or not or if any amendments have been made in the House of Lords.

What we do know is that, whatever happens with the Bill, this government is intent on hurting working people and undermining unions.

We are campaigning to defeat the Bill  – but we also need to make sure we are ready to deal with the consequences of it.

Which means we must be stronger.

♥ UNISON week is part of ♥ unions week, a national event organised by the TUC, www.heartunions.org.  It’s the time to begin making our movement as resilient as possible. To do this we need to make sure our current  members feel proud to be in their union. We know how important unions are—now let’s show everyone!

The week is about celebrating UNISON and the achievement of all unions’ and making sure we are the strongest union we can be.

There are several measures in the Trade Union Bill that would make organising and working for a fairer society much more difficult.

For example, we would only be able to strike if 50% or more of eligible members vote in the ballot. As you know, the right to strike is rarely used, but it does underpin negotiations with employers.

It’s hard to believe, but some people don’t even know that it was unions that gave the world weekends—and lots more!!

So make sure your colleagues know that unions have brought significant changes to society, such as: