In February, UNISON organised a showing of the award-winning film I, Daniel Blake at Blackburn College. We would like to thank the Blackburn and District Trades Union Council for being great hosts and allowing us to collect donations for the Blackburn Foodbank on Oakenhurst Road.

UNISON collected £260.67 (and 5 Euros) and BwD Local Government Branch Chair, Ben Greenwood went along to see the Foodbank Manager, Ros Duerden and learn more about the facility and how they help people in crisis. 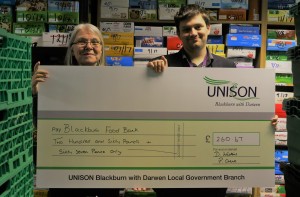 The Foodbank also screened the film themselves and Ros said of it;

“The film was an honest portrayal. It showed the reality of why we are here. We are the people who are working alongside those in crisis. With support, people can make positive changes.”

Ros went on to explain that The Trussell Trust, the seeders of the Foodbank Network, are also a Pressure Group who influence Parliament.

“It is essential that we carry on helping those in terrible need but is equally important that we get the message across on just how bad things are.”

“We would like to thank UNISON for their donation and efforts. Some things we don’t get given so your efforts help us provide them.” 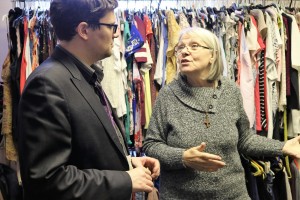 “UNISON has a long tradition of supporting groups like the Blackburn Foodbank. We share the same aims in helping those in crisis, whether it is Members or people in the Community.

We would like to thank Ros Duerden for showing us round the Foodbank and telling us how they help residents of Blackburn and Darwen in the direst need.”

The Blackburn Foodbank are always in need of donations so if Members wish to help in any way they can, they can deposit in any number of town centre locations or contact the Foodbank on 01254 672756