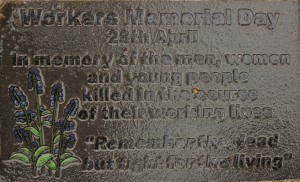 “Remember the dead, fight like hell for the living”

Statistics don’t lie (just the people who quote them). Every year, more people are killed at work than in wars. Most don’t die of mystery illnesses or in tragic accidents…no, most people who are killed at work do so through the wilful negligence of their employers who decided that their Health and Safety wasn’t that high a priority.

According to the International Labour Organisation, around the world, going to work causes the death of 6,000 people every day, or around 2.2 million a year. The ILO estimates that more than 20,000 of the names on the annual industrial death toll belong to school-aged children.

In 2011, David Cameron declared “war on health and safety culture” saying that it was an unnecessary burden on business. It is clear from the rhetoric that only money matters. However, even though the Government uses the “friendly” media to drive their agenda home to the British public, the voice of the Union Member refuses to be drowned out.

The theme for the day this year was “Strong Laws – Strong enforcement – Strong Unions” because across the world we are seeing growing attacks on health and safety protection. In Britain, the Government has removed protection from millions of self-employed workers, and across Europe where the European Commission are pursuing a dangerous de-regulatory strategy. However, strong laws are not enough if they are not going to be enforced. That is why we need proper inspections and enforcement action against those who break the laws. Here in the UK the number of inspections has fallen dramatically in the past five years, however in many other countries enforcement has always been non-existent. 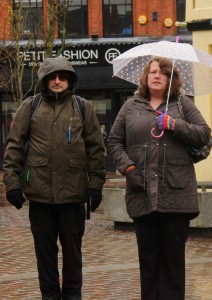 “That is why we need strong unions. Unionised workplaces are safer, yet the Government is trying to stop unions protecting the health and safety of their members by restricting the right of health and safety representatives to take time off to keep the workplace safer, and also trying to reduce our right to strike when things go wrong.”

The 2016 event was once again co-ordinated by our friends and comrades at the Blackburn and District Trades Union Education Centre at Blackburn College.

John Murphy, whose friend Tommy Hart first introduced International Workers Memorial Day to these shores in 1992, and Alan McShane gave impassioned speeches to attendees about how important health and safety is to all of us. 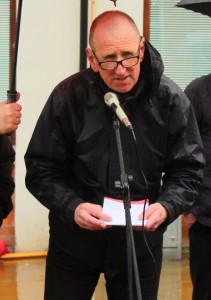 Unfortunately, there are many, many harrowing stories on how disregarding health and safety can wreck lives but it is worth recounting a story Alan told the gathering.

Cameron Mincell, a teenager from Bury, lost his life whilst working on a machine that had the guards removed from it by his bosses. As a result, he was dragged into that machine and was killed. The Health and Safety Inspector said that safety was non-existent and the factory was a death trap.

Cameron’s death was not an accident – guards on his machine had been deliberately removed. The bosses of this “death trap” were taken to court and the court said:

“There was no safety regime at the engineering company, with youngsters left untrained and unsupervised while safety guards had been removed from machinery.”

“He was so proud of himself when he got the job. He should never have died for doing the right thing, for going out to work to earn a living and to be trained to become an engineer.

Cameron’s death is a tragedy for us but it wasn’t a tragic accident. It was due to terrible negligence and appalling lack of health and safety. We want the Government to make sure no other young person is ever at risk again”

Cameron died from his injuries in 8 January 2013 – one month after he started his first job.

Protect yourselves and your colleagues – join UNISON today. Please call 01254 585220 for an application form or follow the link https://www.unison.org.uk/join/